Well, I have to make room, so the arcade games are starting to go.  Gremlin "Comotion" and Midway "Extra Bases" were parted out today.  The dead husks are sitting out at the curb as I type.  I kept the PCB's and took some last photos which I'll add a little later.

These were both used to develop the MAME drivers.  I created "blockade.c" based on Comotion and some schematics from Al Kossow.  The Midway "Extra Bases" cocktail contained a Black and White monitor, which was interesting because the game at that time was in color in MAME.  It turns out that the game had a dip switch, which could either drive a Black and White monitor directly with the Luminance output, or in another configuration, drive the color conversion board and play the game in color.  This was sort of "unknown" or at least not well known at the time in the MAME circles.

Ironically, as I pulled the monitor out of the "Extra Bases", I noticed it had some burn-in from "Blockade", which is basically the same hardware as "Comotion".  (Obviously not the original monitor)

These two games were bought from two different places, but being of similar vintage I guess I shouldn't be surprised.
at August 26, 2010 2 comments:

I am planning to have a hotel room party at Penguicon this year, bringing my old game consoles out of storage.  (Actually two parties, one on Friday and one on Saturday, if all goes well.)

I started by testing out a Coleco "Telstar" Pong and the Atari 2600 yesterday.  You can see my team of playtesters trying out some "big-screen" Pong action here: 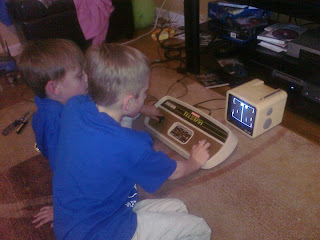 Here is just a taste of the excitement in store... :)  Next I'll be pulling out the Intellivision, Vectrex, and whatever else I can dig up.  If anyone has some smallish TV's (preferable analog!) they want to loan for the weekend, I could probably use them.

Perhaps I'll throw in some Apple II games, or some other system emulators. Moria/Angband?  Text Adventures?  Trek?  Am I crazy enough to bring in a full-sized arcade game?  The possibilities are endless, but the hotel room is not, unfortunately.  If only I had a TARDIS...
at April 16, 2010 No comments: 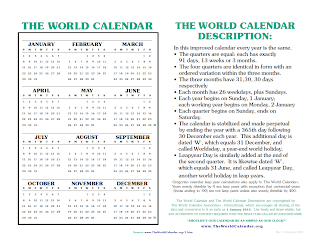 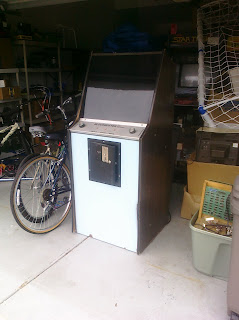 I'm going to be getting rid of some of my videogames. They take up too much space, and I'm never going to get around to repairing them all. This one is from a company called Elcon Industries, formerly of Royal Oak, MI. It is a discrete logic game (I assume), with 5 different games available. (The marquee actually says "Blockbuster +4", which makes more sense.)

I assume these are all variations on Pong/Breakout/etc. As you can see, it's not working properly, but it does run through the "attract mode" on power up.


I'm wondering if this is an original game, or a clone of an existing one?

You can see some graphics glitches, but it is kind of interesting. The Cosmic Attackers game I have from the same company had a Sega Space Attack PCB inside.

Here are some more stills: 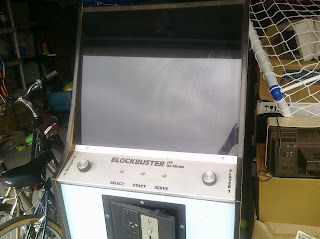 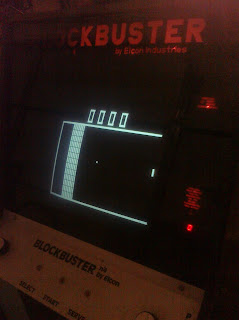 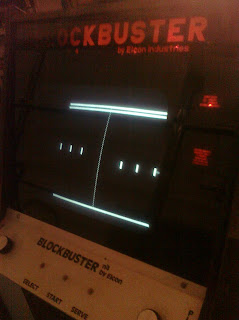 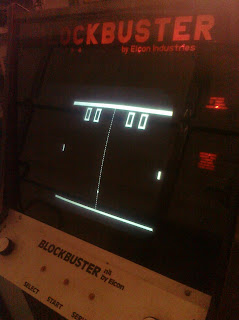 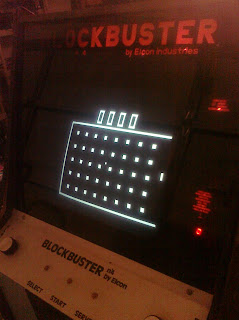 You can see that it also has a few bulbs which light up some game description text, and there is also a single "seven-segment"-style display for good measure. I'm not sure what that is for.

I'd love to hear from you if you have any info on this game, or others like it, or info on Elcon Industries, or ideas on what to do next :)

I don't have the key to the back of the cab, and I haven't "broken into" the back to take a look at the circuit board yet. I think that might be the next step.
at March 20, 2010 3 comments:

I'm the kind of person that can get very interested in things that others might not notice. For me, his seems to occur from time to time with math problems. I'll be thinking about an engineering problem, and I will get caught up with some mathematical aspect of it. Usually, it's some problem which is easy to state but not obvious to solve. (Then again, I'm not a mathematician)

Over the years, I've gathered up a list of these problems. And now, I'd like to share some of them on this blog. I hope some of you, at least, will find them as interesting as I do.

Today's problem is fairly simple to state - and I thought about it for the first time many years ago. Suppose I have a continuous function y=f(x), defined on an interval from x0 to xn. I know _everything_ there is to know about the function. Now, for some reason, I need to approximate the function using a "piecewise-linear" function. This is just a set of straight lines connected together at "break" points. (You can also think of this as an approximation based on splines.)

For say, a fixed number of break points, what is the "best" way to approximate the function? (BTW - this is something that is practically done all the time, in embedded computer programs, using "table lookups" to approximate functions)

For a given set of breakpoints located at each x_i, you can start by picking the breakpoints at (x_i, f(x_i)). In other words, points on the curve f(x), and connecting the points with straight lines. However, you will quickly notice that the approximation is biased, based on the concavity of the curve.

A better way for a given set of points at x_i, is to solve the linear least-squares problem to find the optimal y values, which minimize the error between the approximate curve and the actual one.

But the key question seems to be - how do I locate my points in x? I see no easy way to do this, without non-linear iteration. It seems strange that it is trivial to locate the points in Y given X values, but hard to locate the X values. I can imagine some heuristic rules like "I should use more breakpoints where the function is 'curvier'". But it's not at all clear what this means :) Maybe I need to think about the meaning of "best" a bit more.

So, to summarize, we have a situation where we have a function which we know everything about, and a simple space of approximating functions, but we seem unable to match the two together, without resorting to nonlinear iteration.

If this one is too easy for you, feel free to handle extensions to this problem with higher order piecewise splines, and/or multidimensional functions. :) I can imagine practical applications for a good algorithm in this area.
at February 06, 2010 7 comments: